when i went to check on my house around noon today, i went ahead and took some pictures of some of the things i saw. there were a lot of trees blown over and branches broken. small trees, big trees, and everything in between. i didn’t take any pics on the way to my house, so i didn’t get pics of macgregor by/in hermann park, which was strewn with trees. i think one side was blocked completely by trees and/or water, so cars were going in both directions on one side. i also didn’t get a pic of the downed power line i almost drove into. of course, it was probably not live, since there were only a couple of places in my drive where i saw any sign of power being on. anyway, let’s get through these…
this is a shell station on richmond, between shepherd and montrose:

this is the feeder to richmond/wheeler from the southwest corridor. you can see some of the buildings from downtown in the background:

this is a traffic light at 288. i don’t remember what the cross street was. i think it’s binz. i was on almeda at the time:

here is one of many fallen trees. this one was on almeda between macgregor and holcombe (the alta lofts are to the left, off-camera):

these trees were on macgregor between almeda and 288 (there’s a luby’s just to the right in the pic):

this is brays bayou, taken from macgregor right before it hits 288 (the bayou goes under 288 at this point):

here is another picture of brays bayou. this one is looking from holcombe toward macgregor and hermann park:

i took the on-ramp from macgregor to 288 because i thought i’d use 288 to hop over to holcombe. however, that didn’t work out too well:

i drove down near the water covering 288, took a couple of pics, then turned around and went the wrong direction back up the on-ramp to macgregor.
here’s a fallen light pole that was on holcombe in between almeda and braeswood:

i hopped the left side of my truck up on the curb to go beside it. about 100 yards earlier on the some road i’d encountered this fallen tree:

i had gone through a non-functioning light and driven right up to the tree. oddly, a mini-van came right up behind me and stopped when i did. i’m not sure if they didn’t see the huge tree blocking the whole road, or if they thought i was going to ram it out of the way, or what. i had to wait for them to finally stop and back up before i could back up too. while i was backing up, i went ahead and took this picture to the entrance of the va hospital:

the mini-van and another vehicle had gone on the wrong side of almeda to get around the fallen tree, but of course as i was going around traffic came toward me. and even though it’s 3 lanes, someone was in the lane i was in. i just sort of kept driving and assumed they wouldn’t drive obliviously like the mini-van driver. fortunately, they saw me and switched lanes. i took the opportunity of an opening to hop back onto the right side of the road, and that’s when i came up on the fallen light pole i showed earlier.
and of course i saved the most interesting for last. the fallen trees were impressive, but after you’ve seen about 50 or more of them, they kind of lose their awe value. this is…or should i say was…a building on almeda just north of wheeler (richmond): 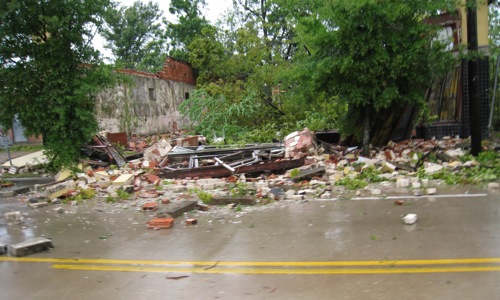