there aren’t all that many pictures of me floating around where my face isn’t covered. here’s one taken by my friend jack potts while we were on our brenham excursion a few weeks ago… 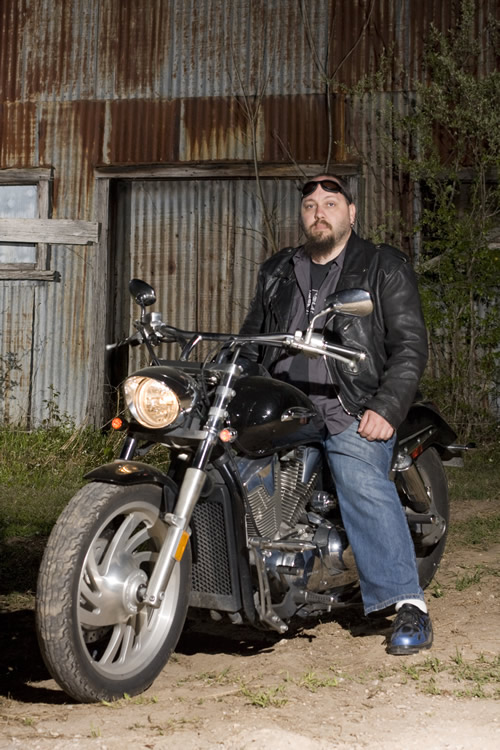 it was taken very near the entrance to the washington-on-the-brazos state park. it should be immediately obvious for numerous reasons why i don’t like having my picture taken. but i do like my motorcycle. and my shoes. anyway, jack is bohemian photography and he does some cool stuff.

huh. almost two weeks since my last entry. both a lot and not much has happened.
the geek gathering was last friday. it went alright. while there, jay mentioned word had gotten back to the owner of joystix about us talking about the place on the show, so he offered to give us passes to meet us and discuss the possibility of hosting something in the future there. it was cool to go back. i played wizard of wor some more. i also played a sit down racing game with groove. he won two out of three, both times beating me just barely. and i thought i had skilz. at least i’m fast on my bike. 🙂
last saturday i’d dropped by cactus music because i was looking for some stuff by coppe, which i’d heard on the new soma fm station digitalis. they didn’t have any, so on thursday i dropped by soundwaves. they also didn’t have any stuff by her. turns out i guess it’s kind of hard to find. i did pick up some other stuff at soundwaves though:

old punk/hardcore, old industrial, new meat beat, and the postal service single i didn’t have.
this past sunday i went over to the potts to cook out, and i was surprised to see josh caldwell there. evidently he and his family are most likely moving back to houston. i took a romeo and juliet maduro over there, and smoked some of it. unfortunately, my body decided it was too much and didn’t appreciate me for it. i tried to hold out, but after about 30 minutes my body decided it wasn’t worth it. i got up and left, and out by my pickup i went ahead and threw up a few times instead of having it happen while i was actually driving. let that be a lesson to all you kids — smoking isn’t fun or cool!
i missed an email from my mom reminding me of my dad’s birthday. and i didn’t remember myself. i guess i should put that in my calendar. plus the last email from my mom started with something along the lines of “i’m writing this expecting i will get a reply”. i haven’t replied yet. perhaps i’m not as good of a son as all of the holiday cards i get from my parents would seem to suggest.
yesterday was maintenance work, so i went into work late and stayed at work until about 12:30am. everything went well, i have to say it was a good day.
today i got up way earlier than i should on a weekend…before 9am. i headed over to some soccer fields and got too much sun while watching dietrich and jackson play soccer. during jackson’s game i was playing with dietrich and had him on my shoulders and was leaning back and forward and to the side, and at some point i strained my neck so now it hurts. jennifer’s kids were in the same soccer program…family fair positive soccer, or something like that. it’s kind of funny because it’s supposed to be non-competitive. so they don’t really keep score, they rotate players into every position, parents and coaches have to only say positive things, etc. i like to make fun of it, but i understand what it is a reaction to. afterward we went and ate at cici’s (doesn’t that seem like the only appropriate thing to do?), then i came home and took two or three naps.
oh yeah, at some point i watched the extras on winged migration. it turns out they didn’t use drone planes. they actually had gliders and balloons and boats and stuff with people on them. the way they got a lot of the close-up and amazing shots is because they had people live around the birds from the time they were born, had them get used to the equipment and such, and then were able to film them from very close while they were flying. it was some really interesting extra information on the dvd.