i mentioned a while back on here that a few months ago my logitech harmony remote (model 676) fell off the back of my couch, and after that the glow function would never turn off. the glow button still worked (on and off), but the glow timer didn’t…when a button was pressed that made the glow come on, it would stay on forever. other than that, the remote still worked perfectly. it wasn’t horribly annoying to have to hit the glow button, except when i forgot a couple of times and the batteries ran down overnight. not cool. i did some google searches and could find people describing the problem, but no one had solutions other than going into the software and changing the glow timeout value, and/or reloading the software. i guess that worked for some people, but it didn’t for a lot of others. some people were saying this was a known issue and logitech would exchange them under the warranty. but mine wasn’t in the warranty period. i finally gave up and bought a newer harmony remote a couple of weeks ago (model 700). which is nice, although it can’t control as many devices (6) as my previous one (12 or 15 or something). oh well.
since i’d already gotten a new one, i decided to take the old one apart and see if i could see anything obvious. i took a couple of electrical engineering courses in college, and have dabbled a bit with electronics and soldering, but when i got it open my reaction was pretty much “yep, that’s a circuit board alright.” “there’s some resistors, and capacitors, and ir lights, etc.” but nothing looked burned or melted or something obvious. i was a bit disheartened, but not surprised by my lack of finding the cause.
but then i decided to do some more google searching, and i actually came across a thread where someone mentioned what the problem with their remote had been (describing my situation) and providing a solution. basically, the remote has a 32.768 khz crystal on it, and that is used as the timer for the glow function. in fact, that crystal is used a lot for clocks/timers, specifically in digital watches. if you’ve ever replaced the battery in a digital watch, you’ve likely seen one of these crystals. usually there is a bunch of white plastic, a spot for the watch battery, and you can see this crystal.
anyway, i took my remote apart and unsoldered (is that a word?) the crystal from the circuit board. (note it was also in some hot glue, but that wasn’t really stuck to anything very well…i think it was more just to keep it from jostling too much. in the pics below you can see hot glue on a couple of other components.) here’s what the one out of my logitech harmony remote looks like:

note it actually has “32.768J” printed on it. well, mine did. (in the picture the “3” is worn off, because of the way i was carrying it around with me when i was looking for a replacement.)
i didn’t feel like trying to scavenge one from a watch, so i headed off to the most convenient place: radio shack. man, have they fallen. they had two cabinets of about 8 or 10 drawers each with electronic compenents. no crystals that i saw at all. i did, however, buy some 0.032″ diameter solder while i was there since all i have is huge diameter and it would drop way too much at once for this job. the next convenient place for me (because my friends were going to that furniture store, the dump) was fry’s (because it is right by it). they have a long aisle of components, but no crystals that i saw. i even asked a couple of people who worked there. no luck. i was worried i was going to have to order one online. but yesterday i was working maintenance so i had the day free, so i used it to go to epo (electronic parts outlet). they had a bunch of crystals, including the one i was looking for. yea! it cost me about $5. (but if you need one, you can find them online too.)
i came back home, and – having already removed the old crystal a week or two ago so i could take it around with me – i clipped the wires so they were about the same length as the ones on the old crystal, did a dogleg bend on them so it would rest well on the board (and make it easier to solder since i was doing all of this completely freehand), and soldered the new crystal into place. i put the remote back together, put the batteries in, and…my glow timer works again! how awesome is that?
well, i thought it was pretty freakin’ cool.
anyway, i thought i’d provide some pics for other people who might be having the same issue and are interested in trying this fix. (note that i’m someone on the internet you are listening to, so obviously i take no responsibility if you fry your remote, or your cat, or your house, or yourself, or void your warrenty, or anything else.) even though i have a 676, i assume probably a lot of the remotes use the same crystal.
here are the location of the four small phillips screws you need to remove to get into the case (on a 676): 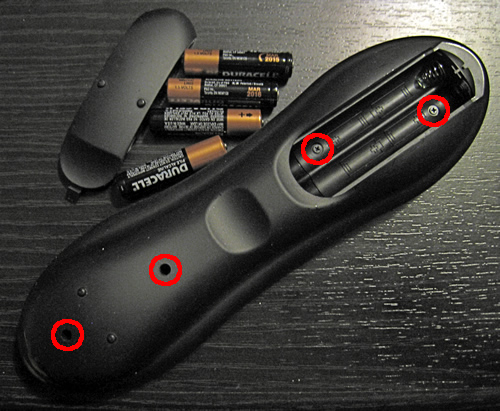 note that two of them are underneath where the aaa batteries sit. (which you should have known you were going to need to remove, right?) the other two actually hold the silver metal frame in place that goes around the screen on the front of the remote. once you’ve gotten the screws undone, there are about four or five tabs on each side of the remote holding the front and back together. you just sort of have to pry them apart, and hope you don’t break too many of them. (or at least that was my technique. hey, it’s screwed on anyway, right? who needs tabs?)
once you’ve gotten the back off, you should see something similar to this (depending on your model):

i had already removed the old crystal when i took this picture, but i put a red box around where it was located on my model. here’s a closer view: 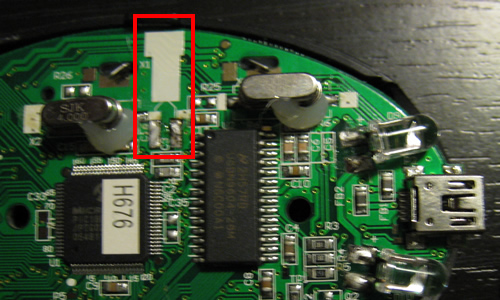 (again with the red box.) and finally, here’s a picture of the new crystal in place: 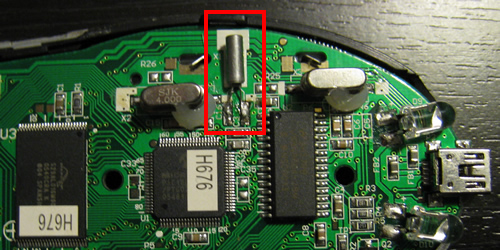 don’t make too much fun of my kr4zy l33t soldering skilz. it works. i mentioned above that the original crystal was lovingly cradled to the board with hot glue, but i didn’t put any hot glue on my replacement. i guess i just like living life on the edge.
anyway, i hope maybe this will help someone else fix their logitech harmony remote, instead of having to live with a broken glow timer, or shelling out big money for a new remote.