i got back on i-81 and headed into tennessee. coming into bristol i saw a sign for a birthplace of country music museum and decided to check it out. it turns out it is in a mall. bleh. so i didn’t actually go into it. they looked like they had rows and row of cds, but i didn’t look at what they had. i decided i didn’t really need to be buying a bunch of cds on the trip. my dad and brother might be able to spend a lot of money there.
while pulling over to get gas, i realized my engine was clicking some. i’ve heard that before in other vehicles i’ve owned, and it usually meant the oil was low. after getting gas i checked the oil, and sure enough it was low. i put two and a half quarts in it. it leaks some, but i’m guessing it’s also burning some. hopefully that won’t turn out to be anything horribly wrong with the engine itself.
i-81 turned into i-40 and i headed into knoxville. in knoxville i stopped to try and find a circuit city or best buy or somewhere to buy something to listen to music. i ended up going to a sears in a mall, where i found a cd boombox with a line-in. so i bought it and the cheapest sirius unit i could find. the guy who helped me was from alabama and another employee was his friend and was from Texas (midland). turns out they were both going to some bible college there in knoxville. anyway, i called sirius and signed up, and a few minutes later i had sweet, sweet music. excellent!
back on the road, i took a turn off i-40 and headed south on 27 to rockwood. i had seen a sign for an old-fashioned drugstore and soda fountain, and i thought it might be cool. i ended up eating a place called junior’s that was across the street from the drugstore. the food was okay. the best part is the typical small town thing, where most of the people are old and everyone knows everyone who comes in, and they generally know everything that’s happened recently to everyone too. i didn’t have cash and they didn’t take credit cards (of course), so i had to walk down to an atm and get cash to pay junior. (what, you think junior doesn’t run his own restaurant?) one thing i’d forgotten about is getting sweet tea easily in the south. yum. it’s so much easier than having to stir in tons of sugar. and lucky y’all, you get to see a pic of my truck at junior’s: 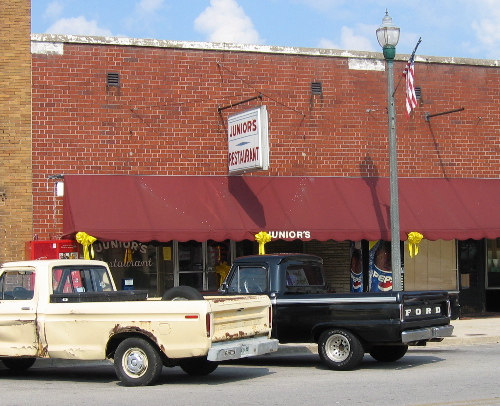 after that i headed over to the drugstore and got a mint chocolate chip shake for the road. i jumped back on 27 and headed south to 30 west. zowie. talk about twists and turns and steep grades! this would be an awesome (and tiring) road for a motorcycle ride. lots of turning, going both up and down, and some straighter parts in between to give you a bit of a rest. it was really pretty too. i took 30 to 70s to i-24 and into nashville.
i once again decided i needed to get back to Texas so i didn’t stop anywhere. i kind of decided i can have one extended diversion per day, and 30 ended up being it. it took me a long time to get through that. so i hit i-40 and headed to memphis.
in memphis i sort of got lost, and i was on the edge of the map scott had given me (southeastern states), and it was after dark. i stopped right near graceland and put some more oil in the truck. then i drove around in what are probably some questionable parts of memphis. i stopped and bought a map of the u.s., and eventually i hit 51 and then jumped on i- 55 (even thought i’d originally been trying to get on 61) and headed south into mississippi and to batesville where i checked into a comfort inn and wrote the day one entry. miles today: around 650.