in my last entry i forgot to mention why i’d almost decided to not go to austin last weekend. on wednesday evening when i got home i was itching a lot, and when i looked i had red, raised spots on my upper arms and sides. i went to sleep like that, but when i got up in the morning it was all gone. i thought i had an allergic reaction to something, but i wasn’t sure what. on thursday evening the same thing happened, but it was even worse. i didn’t know what was causing it, and i was worried it might not be just an allergic reaction. but it didn’t happen friday night, so i went ahead and went to austin. and it hasn’t happened since. i’m still not sure what might have caused that. i tried to think of all the various stuff: new soap, new laundry detergent, new deodorant, etc., but none of that applied. weird.
at some point in the last couple of weeks i watched platoon via 99 cent itunes. i think i forgot i’d seen it. well, i wasn’t sure. i guess i had at some point, but i don’t recall when. because a fair bit of the plot stuff was hazily in my brain as it came up, more than just a trailer or someone talking about it. it’s a good movie, but it didn’t seem incredible. of course, some of its impact was probably the time it came out versus what else was in existence at the time.
last week another 99 cent rental on itunes: running on empty. i’d never seen it. it’s the story of a couple who are hiding from the authorities because they were in a radical protest group during the vietnam era and blew up a napalm clinic, seriously injuring a janitor (who wasn’t supposed to be there). they’ve had a family (two sons), and move around a lot and create new identities. river phoenix plays the older son. the problem is the oldest son is near the end of high school, and he’s never had a romantic relationship or any aspirations for college. he can play piano well, and catches the attention of a music teacher at the newest town they move to. plus he gets interested in the teacher’s daughter. i thought it was a very intriguing story, and at the end of the movie i wanted to know what happened after that. i figure if a movie can make you care about the characters and their lives like that, it’s done a pretty good job. it’s from 1988 and had a couple of oscar nominations, and won several other awards.
friday after work i had supper at mission burritos with jack and the potts kids. then a few hours later sue got off work and came over and we went to watch a movie. we ended up agreeing on hot tub time machine. based on the preview, it was one of those that could either be pretty funny or pretty bad. fortunately, it ended up being pretty funny for the most part. the story is about these four guys, three who are older and they’ve sort of not had good adult lives, and one of their sister’s sons who hasn’t ever really done anything with his life except stay in the basement playing second life. one of them almost dies from a running car in a closed garage, so they decide to all take a trip to this awesome ski lodge they went to back when they were younger. but the place has fallen into hard times. then the hot tub turns into a time machine and times them back to 1986, where they are their old selves (except the son, of course, who wasn’t born yet) and have to relive that time. hilarity ensues. like most comedies these days, i guess everyone feels the need to have at least a few over-the-top gross / disgusting / sexually perverse bits. this movie was no exception. but gladly it wasn’t out of control with the number of those.
kind of funny, when sue and i were leaving the theater i let a couple walk down the aisle in front of me. when the guy was passing i thought “man, his jacket looks a lot like my black dickies hoodie.” then when i got in behind him i noticed he was wearing black and white wingtips. doc martens ones. what are the odds? happily, i had decided to not wear either my dickies jacket or my wingtip docs that evening.
speaking of the shoes, yes, i got the doc marten wingtips. fortunately, these are the right size and don’t have any discoloration or bad spots. here are a couple of pics. first, lounging on my couch: 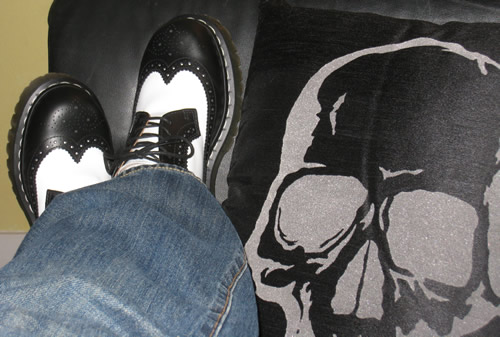 and here is a closer view of the shoes themselves: 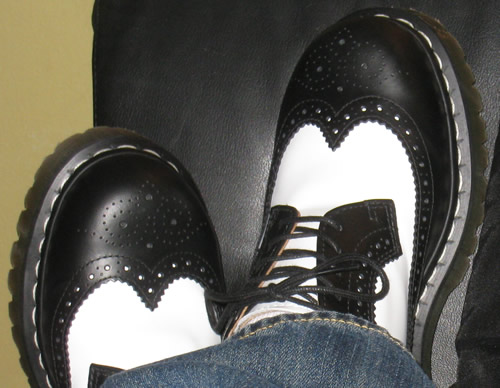 i managed to call the place i bought my boots from, and i was able to exchange them. so i shipped the boots off via ups on saturday. hopefully the exchange will go well and the new size will fit me better. (at which point i guess i’ll be taking a pic or two of them as well.)