i was a bit worried when i made plans with the progressive rep to meet me at my house for this morning. i’m not much of an early riser generally, and since lately all i do most of the time is lay in bed with my leg propped up i’ve not had much incentive to get up in the morning. so i was a bit worried she’d knock on the door at 8:15am, and i’d be groggy and disheveled and half-naked or take 20 minutes to answer the door. plus i wouldn’t really be able to tidy up the place at all because i’m slow-moving and have limited capabilities.
worrying about this caused me to wake up around 9am and not really be able to get back to sleep. i did on and off until around 10am though. i decided i should go ahead and get up and get ready.
she ended up coming by between noon and 12:30pm. they offered me $6885 for my bike title, or about $4k if i chose to keep the bike. i looked up my bike on blue book a few days ago and it showed $6k. they figured about $1k of custom parts on the bike, which was about what i came up with. then they have to do sales tax and tt&l i guess, plus my $250 deductible. and the blue book price was based on 24k miles and i had 33k. so i thought $6900 seemed pretty fair.
i thought about keeping the bike and taking the $4k, because i think other than the fork most of the damage is cosmetic-ish. i mean, i was thinking i could get the bike and use the $4k to put on a raked out new front fork, maybe a different gas tank, plus any odds and ends, and hammer out the rear fender, and have a good start on a nice rat bike. i could even sell other parts off of it to make more money for it. but in the end my more practical side won and i just took the extra $2900.
the progressive rep was pleasant to work with and i was pretty happy with the way everything was handled by them. it was a better experience than i had trying to deal with the health insurance stuff so far. and i’m afraid that may only get more difficult, depending on what if anything goes on with the people in the car who were actually responsible for the accident but took off. the progressive rep still hadn’t seen the police report, so she didn’t know the status of the case.
that said, here are some pics of the bike that were taken when it was at the tow yard (march 9th).. 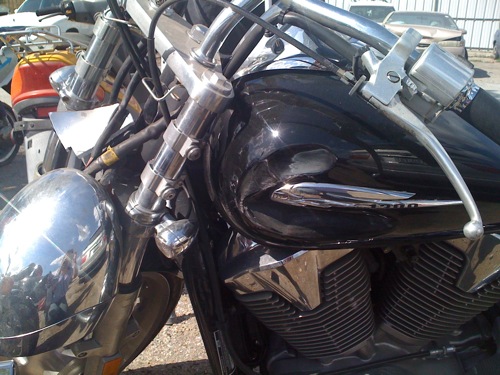 this is the side that hit the car. if you look at the fork, you can see it is bent back toward the bike and to the bike’s right. the front tire is the first thing that hit the car. i’m pretty sure it pushed the tire all the way to the body of the bike, as there is a dent on the back of the front fender and i can only assume it is from something on the main part of the bike. you can also see there is no rear mirror (or mount pole). and obviously the tank is banged up. that was probably the second thing to hit the car. here’s a closer look at the tank… 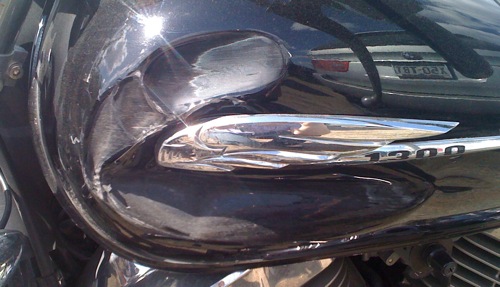 as you can see, it collapsed the tank wall. the chrome badge must have bent in and then bent back…i guess. although it is entirely possible it was actually my knee that dented the tank because it was between it and car…i’m not sure about that though…might be a little high and forward for my knee (but i did feel myself lift up and my knee cap move). i think maybe the handlebar went above the trunk so the tank actually hit the car directly. (but there was a small dent behind the badge on the other side of the tank, and i’m guessing the one place on my right knee that hurts may have done that.) i didn’t smell gas or notice any fluids on the ground (although i might have missed that), so i don’t think it actually ruptured the tank.
here’s the back of the left side… 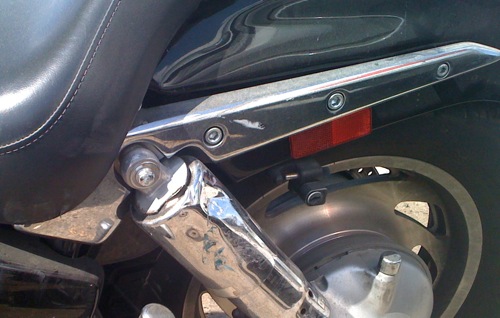 i’m not sure what made the top portion of the rear shock get all those dents on it. it’s hard to tell in the pic, and i didn’t notice it at the tow yard, but the whole rear fender (under the seat and running back) is bending away in the pic (shifted more over the right side of the bike). at the end of the fender it’s probably shifted about two inches or so.
and here’s a view of the tail end of the bike…

you can’t see the tire so you can’t see how much the rear fender is bent, but you can see that the metal chromed license plate mount has broken and the left blinker is bent at the mount point. i’m guessing the blinker probably hit the car when the back end of the bike swung around with the leftover forward momentum of my bike that wasn’t stopped with the front fork.
the only other thing that i know for sure hit the car and is obviously showing it is my leg, and it’s kind of beat up too. perhaps i’ll upload a pic or pics of it at some point.
after she left i heated up some of the microwaveable soup the hrc and mini-hrc had brought for me, and had that and a big red while i watched a bit of daytime court tv before getting back in the bed. man, they have a lot of ads for lawyers trying to get you to sue people to “get what you deserve” during those shows.
this evening i went to james coney island for supper. i had noticed a motorcycle pulling into the parking lot, and when i walked by it i noticed a black “x” over the headlight in electrical tape. the only other times i’ve seen that it was people in todo moto. when the two guys got up to leave, i asked them if they were in todo moto. i think i had met one of the guys 6 months or a year ago at west alabama icehouse. they stopped and talked to me for awhile. they’re a rambunctious lot, but they do some interesting things with motorcycles. kind of made me wish i’d kept angelina. ah well.