most of my free time lately has been occupied taking care of xmas shopping. which i believe, earlier today, i finished. yea! now i’ve just got to finish wrapping everything. bleh.
one interesting thing i can think of happened while i was running around doing my xmas shopping. saturday afternoon i was on my motorcycle heading into rice village. i’d just turned off kirby onto times when the black dodge pickup in front of me slowed down. he motioned/yelled at a guy in a white sedan going the other way on times. they both stopped, but a little past each other. they were yelling some stuff to each other, then the guy put his pickup in reverse and started slowly backing up. i started backpedaling, kind of laughing, but he kept coming. i didn’t manage to back up fast enough. fortunately he stopped…or maybe he realized he was sort of stuck on something. his pickup was high enough that the bumper went just above my front tire. it didn’t quite make my front fender though. so his bumper went between my fender and front tire until he got near my forks. here’s a pic… 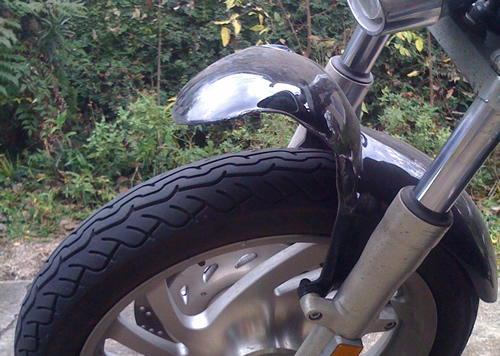 (yeah, that’s not how it’s supposed to look.) good times. he finally noticed me…sort of…and asked the other guy if he’d hit me. the guy said “uh…yeah” so he pulled forward and stopped. i pulled up behind him. he got out and seemed to be pleasant. he wanted to take care of it himself so we traded phone numbers and such. i wrote down his plate, vehicle info, name, etc.
i got home and looked up the cost of a fender. i found a site online with one and was able to get the part number from it. they had it for sale, painted from the factory, for about $260. so even if he ends up flaking, it still won’t be too painful. (not that i can’t think of better things to do with the money.) of course, if he flakes i’ll also be posting all of his info online and seeing if i can get more info about him. 🙂