in my nov 15th entry i mentioned they are moving people around at work, and i had started modding my cube. well, i pretty much finished the big changes on monday. i spent most of today moving my copious amounts of junk from my big cube into my new small one. anyway, here is the before: 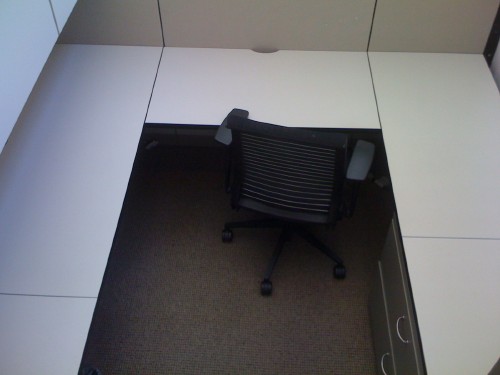 typical office cube. one big entrance and a wrap-around desk, a couple of drawers and a few shelves. institutional, bland color palate. this one is 7.5 feet by 7.5 feet.
here’s the after: 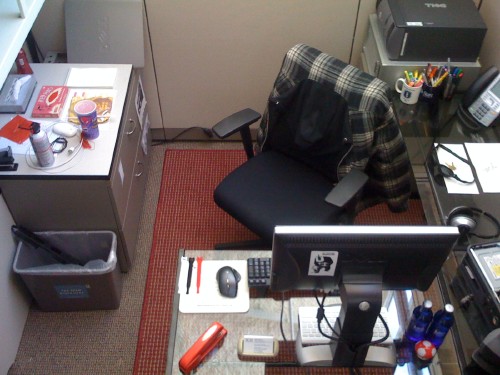 i completely removed all of the desktops. i kept the shelves and drawers, although i moved the drawers around. i bought a cheap metal and glass desk and a 5×7 area rug from target. and i made the best of things.
my immediate management was pretty unsure of things the whole time. an upper management guy had come by and kind of complained to me on monday morning about some of the moving of things i’d done in front of the cube. so i tried to move that stuff (mostly) back to appease him. but a bunch of co-workers and other lower management had come by and said it was really cool. then they wondered if i’d get to keep it.
happily, today i was visited by my complete chain of management, all the way to the top of i.t., and they all had positive things to say about it. so it looks like i’ll probably be able to keep it.
moving on…a week or two ago i gave some money to soma fm. that’s now the second time i’ve done that. it’s free to listen to, so why don’t you go check it out? they have some really nice channels of different types of music. my personal favorites are space station soma (“spacey” electronic), boot liquor (alt.country and old country), and digitalis (electronic alt.rock). lush (electronic alt.pop with mostly female vocals) is pretty nice too. secret agent (if you like james bond soundtrack music) and illinois street lounge (space age bachelor pad music) i enjoy in limited doses. anyway, i already paid for you to listen — go do it.
jack gave me a copy of luxe magazine a while back. he’s done some photography for them in trade for ads. i helped him some with ideas and layout for an ad that ran in this issue. i tell you, some rich people have some really cool houses. some others have really insanely ugly houses.
last night i went to brasil. i was trying to decide where to sit. there was a band playing kind of island music, but it sounded like electronic stuff…probably just a keyboard. i looked over and there was an older guy there playing double mallets on a marimba of some kind. i knew i had to go watch the band. there was him and a female guitar player, then later another (male) guitar player joined in. evidently the marimba player is there mondays, usually by himself. he’s really good. i talked to him and i think he’s been playing a long, long time. he showed me the gear he was using. it turned out to be a foam/mat-based pad keyboard layout (really slick!) that he was running into a korg synth. the synth played drum and bass lines, then he had the velocity/pressure-sensitive pads playing a bamboo marimba and triggering some kind of violin tones or something. (obviously what it is triggering could be completely changed, but he’s a percussionist and has played vibes/marimba for years.) the violin tones would follow his playing in key, and he had a foot pedal for sustain on the violin. he also had another foot pedal that could turn on/off the bass/drum accompaniment. it was a pretty slick setup. and like i said, he was really good. and it was obvious he was enjoying playing.
some of you may not know, i was a drummer in jr. high and high school and played marimba, xylophone, and vibraphone in concert band along with the many other percussion instruments. so that’s part of the reason i thought watching this guy play was so cool. but you should go check him out some monday night. he’s really friendly and approachable, he’s funny, and (did i mention?) he really is good. plus the food and coffee at brasil are good as well. the hrc lives and dies by the b.l.t. with guacamole, and multi-shot lattes. i like the margarita pizza, and the mediterranean sampler (with hummus, tabouli, and substitute chicken salad). plus their house coffee is a nice blend, in my opinion.
and now for an amusing story. friday afternoon i was riding my motorcycle to work. 59 north was jacked up, so i decided to take side streets. i wound my way through neighborhoods until i got to the museum district, then i cut down to mecom fountain. there was a lot of backed up traffic, so i had to wait to hook around and shoot off by the museum of natural science. once i rounded mecom, a hispanic kid in a black tux with blue shirt was holding his hand up stopping traffic. i was right in front of him in my lane. some other hispanic kids — some guys dressed similarly, some not, and girls mostly made up and wearing tube tops and hot pants — were walking from the fountain to the courtyard area. people — hispanic in particular — love taking wedding pictures at that gazebo. and quinceaÃ±era pics. anyway, one kid yelled something at me in spanish as he was walking by, but i had no idea what. then a kid walking by behind him said something excitedly to the one stopping traffic and then ran over to me and stood beside me. the first one that’d yelled saw him, so he turned back around and ran to my other side. then four or five dolled-up hispanic girls all ran over and stood around me as well. a car or two were starting to honk behind me at this point. the guy took a picture, then they all ran off on their way. that was kind of an odd experience. i hope they liked the picture.

5 comments on “cubicle mod + other stuff”