last sunday (sept 28th) i went and ate at tacos a go go, then i headed over to soundwaves and bought some cds:

all of them except the grandaddy album were used. the mbm album is really nice. it’s like a good mixture of styles from the years of mbm i liked.
regarding live bjork tunes, one of the most awesome covers i ever heard was a cover of bjork’s “army of me” from post. i only heard it once, back in the late 90’s. it was a cover by helmet. i even called the station to ask what album it was from. he said it was some import (maybe even a bootleg), so i never found it. perhaps i should do some p2p/torrent searches. i’d love to have a copy of that.
also on that sunday, i went and got gas for my motorcycle. i always leave it on the trip a odometer (so i can see how many miles i’ve gone on the current tank) and then reset it when i fill up, but for some reason i decided to flip over to see how many miles i had on my bike. what did i see staring back at me? 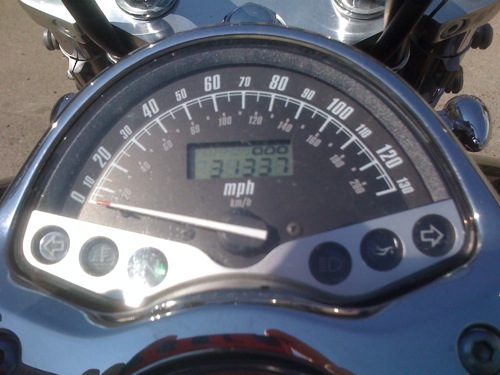 what a stroke of luck! i pulled out the iphone and took a pic of it. and now it’s my latest header pic for my weblog.
at some point last week i watched microcosmos. it’s a documentary about all kinds of bugs and insects and such, shot with a lot of special cameras for very vivid, very close up views and motion control and the like. i also got to watch snails and ladybugs having sex. the snails were kind of disturbing — i almost felt like turning away because i was seeing something inappropriate. the ladybugs, on the other hand, were kind of funny. but overall it was pretty cool visuals throughout — ants, spiders, worms, bees, beetles, etc.
a few days ago i got these in the mail:

both are limited edition releases (limited to 5000 copies), although both have been available for several years. i got copies 3545 (live) and 3571 (recombo dna). i found out about these after learning that the old devo live album had been re-released in japan recently. but as an import it costs like $50. i was about ready to buy it when i found that rhino handmade had made a limited edition run with exactly the same track listing a few years ago, and it was amazingly enough still available…and much cheaper. looking it up also led me to read about recombo dna, which is demos, alternate takes, live versions, etc. from the devo archives (basically lots of tapes from years past). now if i can score copies of the out of print rhino devo hardcore cds, i’ll be a happy guy.
saturday i managed to get the tire on the bel air fixed. they replaced the valve stem and said it was leaking around the rim. that taken care of, i was able to get it inspected. so now one of my three vehicles is legit. the pickup needs inspection, and the registration on the bike expired oct 1. but i got a new plate, so i’m waiting on that to come in before i pay my registration. otherwise it’d be a pain to pay now on the old plate, then transfer/repay on the new one. better to take care of it all at once when i go to the tax office to pick up the new plate. i applied for the new plate on sunday before i saw the 31337 odometer, so it feels like everything magically fell into place.