i got up this morning and decided to go to the at&t store in rice village. i got there around 10am, the line was maybe around 40, about 10 shorter than yesterday. as i was standing there, brock wagner (the owner of the saint arnold brewery) walked up and stood with the lady in front of me. turns out it was his wife. i had a nice conversation with both of them during the 1.5 hours we were in line together. at some point, an at&t person came out and told everyone they were out of the black 16 gig model. *sigh* that’s the one i wanted. they said they had 13 white 16 gigs left, and didn’t mention the number of 8 gigs. (they later said they had 26.) but awhile further back in the line they started telling them they were going to run out. unfortunately for brock and his wife, he had to leave to go give the saturday tour speech at the brewery so they were about 5 people from the front door when they gave up. about 20 minutes later i got in. the purchase only took about 10 minutes. i went with the 8 gig black model. the rep told me my phone would be active in 5 to 10 minutes, so i thanked him and left. all told, it took me about 2 hours.
i drove home and learned i hadn’t downloaded the latest version of itunes (7.7) to my desktop yet, which is necessary for the iphone. my phone still hadn’t gone live on the at&t network, so i downloaded itunes and waited for the phone. which still wasn’t happening. *sigh* i messed around with things, turned it on and off, etc. but it never would find a signal. eventually the sim in my old razr went unregistered, but the iphone still wouldn’t work as a phone. i registered it in itunes, and started getting everything set up and playing with it. at one point i even pulled the sim from it and put it in my old razr to see if the phone would work…it showed up as an unregistered sim. (that didn’t seem like a good sign.) after about 1.5 hours, i decided to call the at&t store i’d bought the phone from. of course, they weren’t answering their phone. so i had to give up and drive back to the store. (fortunately, it isn’t far away.) i walked in and asked if they were having activation problems (which i feared, based on the events of yesterday), but they said no. the guy i’d bought the phone from pulled my sim and checked it. he didn’t say what he had to do, but i think he fat-fingered my sim code or something, because he said “oh” and typed something and restarted my phone and it was fine.
i’m still trying to decide if i’ll be happy over the next two years with 8 gigs, or if i should go ahead and upgrade to the 16 gig during the two weeks i’ve got to change my mind. there’s a 10% restocking fee according to the at&t reps, but if the extra 8 gig seems necessary, $20 to switch would be worth it.
here’s the first pic of my new 8-gig black iphone: 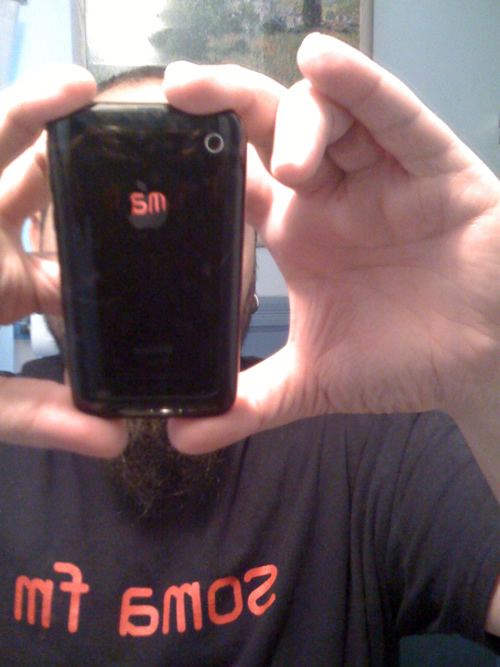 i’ve already set up mail accounts, taken and made some calls, set up and used my apple bluetooth headset with it, sent and received some text messages, configured and played with most of the default apps, and downloaded a few apps from the app store: remote, jott, pandora, and weatherbug.
the pandora app looks to be pretty nifty. the weatherbug app used my gps to set my location to get my local weather info. and the remote app…it rocks. i can control my itunes library with it (or more if you have multiple ones) — it shows me what is playing, lets me browse artists, albums, songs, etc. as if i were at my itunes window, as well as control volume, which apple express speakers are active, etc.
one annoying thing i have noticed is that the slightly changed size of the iphone makes it not fit into the cradle that came with my apple bluetooth headset (which has a place for the iphone and the headset). so i’m currently using the cable that came with the headset instead. i could probably shave a little plastic from the sides of the hole for the iphone on the cradle and the iphone would fit. i’m not sure what i’ll do about that yet.