wednesday we got out of work a couple of hours early, so i took the opportunity to drop by the bank and do some stuff related to my “major purchase”. afterward, a coworker and i went to a starbucks and sat and talked for a couple of hours — which was nice. then i went and did the radio show. i headed home, did some laundry, and hit the bed around 1am.
this morning i managed to drag myself out of bed around 6am. i finished packing and getting everything ready for my trip home, and headed down the highway. i stopped in colombus and filled up my gas tank. about 15 miles on the other side of colombus something very odd happened to me…
there was a lot of traffic on the highway, but at this point there was no one around me. i had just passed through a very small town and was just back up to highway speed when i saw something moving in the median to my left. (71 is a divided four lane with a wide ditch median at this point.) i looked over and saw there was some kind of animal coming onto my side of the road from the median. it was moving sort of slowly, but i was somewhat entranced by the oddity of seeing such an animal out on the highway. i was starting to slow down when it decided to run across the road. i hit the brakes harder and started veering to the right, thinking i could go past it, but then it took off like a shot and managed to get directly in front of me. i pushed the brakes hard and managed to get down to maybe 15 or 20 mph before i popped it. i was on the shoulder at this point. it flew off into the ditch on the side of the road and i came to a stop. at first i thought i’d just knocked it around, but then i looked back and there were a couple of pieces of my vehicle on the highway. some cars came by and drove over them. i soon realized my engine light was on, so i shut off the car. i got out and saw radiator fluid. i went around front and saw this:

yikes. it knocked part of the grill off and pushed my radiator into the fans and the engine. my license plate had been knocked off, and got driven over a few times before i went out and retrieved it. other than that, everything else appeared okay. i was fine.
i went and looked at what i’d hit. i saw it take a breath or two, but it was pretty much going to die. you see a lot of deer running across highways in central Texas, and it’s not all that uncommon for a car to hit one. but that’s not what i hit. what in the world did i hit, you ask? 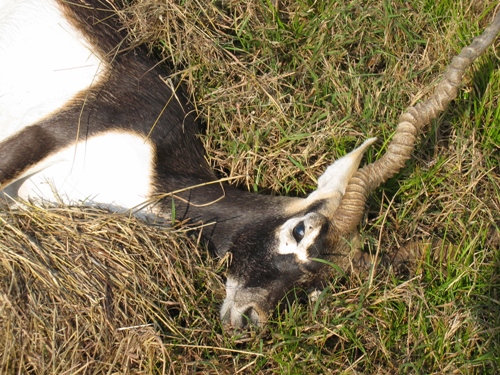 evidently a black buck antelope. i was actually laughing when i called my parents to tell them what had happened. i was also laughing when i called aaa and state farm. “yeah…uh…i just hit…uh…some kind of exotic gazelle or antelope or something on u.s. 71.” i kept making jokes about keeping it and mounting the head or the horns. i wish i could have, it was cool. unfortunately, the tow truck driver didn’t have a saw with him, and neither one of us had a tarp for me to put it somewhere. the tow driver was pretty impressed when i took him around to show him what i’d hit. he said that was probably the oddest thing he’d seen like that, except for some guy hitting an elk on i10 or i35.
i decided to get towed to austin. my mom and dad drove from brady to austin to pick me up. i left the element at howdy honda in austin. unfortunately, they didn’t have any kind of key dropbox and they were closed for the day. i ended up leaving my keys at a valero nearby, and i’m supposed to get the honda guys to go get the keys from the valero store in the morning. it should be fun trying to explain all of this over the phone and get it all taken care of.
if things go well, this could be good all around for me though. i’ve been meaning to take the element in for its 50k maintenance, as well as getting the windshield replaced for free as part of the element class action lawsuit settlement. plus i have full coverage on it so i should only have to pay the deductible. i’ll get some new outer parts, and they’ll have to troubleshoot the airbag sensor system since the front got popped.
plus now i should only have one car with me in brady that needs to go back to houston, if everything else goes as planned. more on that later…