slow week. the only thing of much excitement was going to be the new apple wireless keyboard. after seeing the new imac, then seeing the new wireless keyboard on the apple website, i decided to get one. the keyboard, not the imac. unfortunately, i wasted life and energy going to the galleria for no reason. they told me hopefully by friday. friday i called them, plus two or three other local apple stores, at which point i learned it was going to be probably at least a month. eh. maybe by then i won’t be interested.
i did get a couple of zippo lighters i ordered a week or two ago. i had three before: one black chrome i bought back in 1994 or so; an antiqued brass cynthia bought for me in 1995 i think; and the brushed steel pipe lighter i bought a few months ago. the “black” of the “black chrome” had been chipping off for years, leaving more of a black chrome lighter with the mange. it was my daily carrier for the last several years. years ago i tried to clean up the antique brass lighter (with brasso or something) and stripped off the antiquing. it looked really shiny and nice when cleaned, but it pretty quickly tarnishes and looks like…well, tarnished brass. i’ve carried it at times, but not as much.
a lot of times, once people realize i carry a lighter they get a quizzical look on their faces and say “you don’t smoke. why do you carry a lighter?” (of course, i do smoke pipes and cigars on occasion, but i don’t smoke cigarettes — and have actually never even taken a puff off of one.) my generic response is: “the ability to control fire is what separates us from the animals. sometimes i need to be reminded of that.” i usually at some point also add: “plus, being able to start a fire whenever you feel like it is a really good thing too.” and add a somewhat devious smile.
anyway, i’d been looking for a new zippo on and off for a couple of years, but nothing ever really caught my eye enough. not that there were no designs i liked, but after having my previous issues i decided i didn’t really want one with something screened onto it since it would just chip off in my pocket. this year they came out with a new model, which i decided would be worth purchasing: 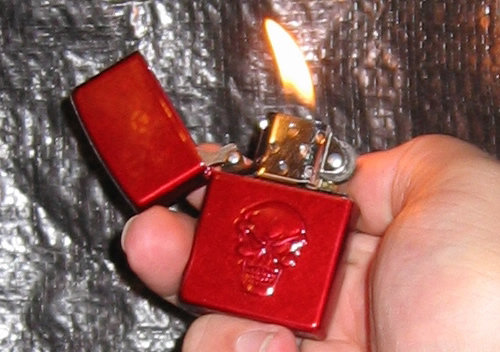 i’m not completely enthralled by the candy red coating, and it’ll very likely chip over time — but the skull is embossed into the metal, so even if the red starts chipping the skull should still be fine (and that’s what’s important).

[aside: skulls seem to be popping up more in my life. in addition to the lighter, i also recently picked up a couple of pair of boxers with skulls on them. (i have a couple of other ones from halloween season a couple of years ago, but the new ones are better.) last weekend i picked up a new chain wallet. while it doesn’t have skulls on it (it has a gothic-style cross), i ordered a couple of wallet chains and one of them has skulls. i’ll give more info on the chains after i get them.]

the second zippo i purchased to stay in my ’65 ford f-100 pickup. it’s a vintage series zippo with an old ford logo laser-etched into the chrome: 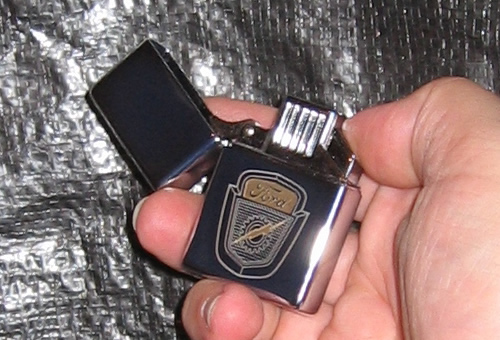 so it shouldn’t chip or flake or whatever. it’s also a pretty cool design, and the shape of the vintage lighter is cool (squared top, smooth bottom instead of indented). related to this, a few weeks ago at the briar shoppe i got a butane torch insert that’s designed to fit in a zippo lighter. i’d looked for something like this years ago but never could find one. since i will not be using the lighter all that often, a regular zippo would dry out and be useless when i actually wanted to use it (and i’d have to be refilling it for no reason all the time). even though i’m sure die-hard zippo-heads are feeling a disturbance in the force, it’s practical for me.
as long as i’m putting up pictures related to lighters and such, i might as well put up a picture of my barling pipe: 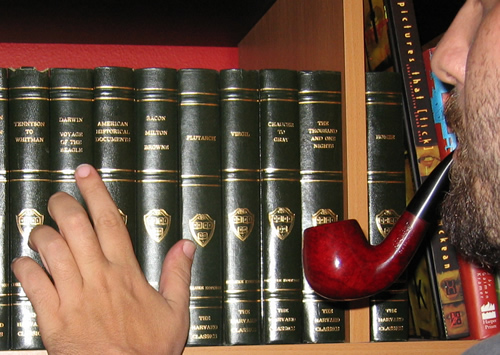 i realized a while back i never did put a picture up of it. note how i took the pic in front of the harvard classics, to make me look all intellectual and stuff. also note that immediately to the right are comic books and work by people related to the comic industry (dave mckean, neil gaiman, etc).

6 comments on “i’m the firestarter”