i’m maxed out on my vacation time at work, which means my constantly accruing vacation time just disappears. so i took tuesday jan 2nd off. i spent most of the day with the potts’ family. i went to the children’s museum with them in the morning. i’d parked near it for a year or two while working in the medical center, but i’d never gone. it’s pretty cool. unfortunately, there are all these kids there, and it didn’t really seem like it would be right for me to push them away from things so i could play around with the exhibits. we then ate lunch, then we came by the house and i gave jack a number of cans of paint and a bunch of painting supplies to use at his new office. i had a lot of stuff from 9023 that i’d probably never use. i’ve still got a lot of crap from 9023 to give/throw away.
wednesday, i whipped up a new promo for the radio show. there was a request for promos to play during a new 5pm news show, so i put something together and submitted it. i wanted something that would be appropriate for a promo during a news show. here it is. also, the local fox tv affiliate came by the radio show because they wanted to do a segment on the new mac quicktime vulnerability. they’d used jay in the past as an “expert”, so i guess he’s on their call list. anyway, they came by and shot some footage of the guys in the studio room, then they came into the control room to shoot some board shots. the camera guy said they (fox) require him to do it. i guess it’s a standard tv shot for segments about radio. (think about it…pretty much every tv segment about a radio show has the guy(s) on the mics with headphones, and a shot of the board with the dials and knobs and meters and lights and such.) they aired some of the footage, and that’s where i come in… 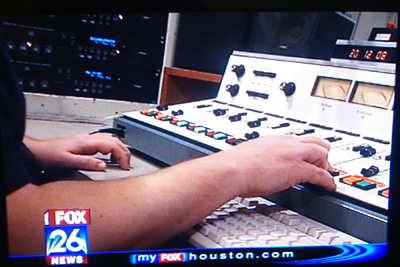 that’s right, my hands and arms are now famous! if anyone wants to get their picture taken with my hands and forearms, just let me know! for a few bucks, one of my famous hands and arms might even be cajoled into going around your neck or waist for a photo op. you’ll be the envy of your small circle of pedestrian friends!
in the segment, they started the board shot with a close-up of a small sign that’s on the kpft board. i think they used it because it says “kpft” in big letters at the top, but they obviously didn’t pay attention to the rest of the text. it’s advice for djs, and one of the things it says is to not use any of the fcc prohibited words…then goes on to list them all, unobfuscated. so the whole list was aired on the local fox station. granted, if you don’t know it’s there you’d probably not notice. although subconciously you might feel either like cussing or sullied for some reason after seeing the segment.
last night was the geek gathering for the radio show. there was a pretty good turnout. there were some good conversations and laughs. i left around 11pm and headed home. i’d just finished an iced white mocha latte, so i was somewhat wired. i ended up watching tape (discussed in the previous entry), then spent a couple of hours messing with the remote the potts’ bought me for xmas. i’ll give it its own entry.

2 comments on “slacking for christ”