today was a driving day. i left out on 278 west, then went south on 61, then west on 82 into arkansas. i hit 165 south into louisiana. i stopped in columbia for a late lunch, eating at a place whose name i forget. it was pretty rundown and dirty and local. the food was fair. it started raining while i was there, then stopped, but when i got back on the road it poured. this is when i learned there is a leak from somewhere that drips right around where the radio would be if there were one. i also learned one of the windshield wipers doesn’t really go back to its lowest position like it should when you turn them off. ah well.
when i hit 84 west i decided i could probably make it to the Texas border and still have enough light for some pics. so that’s what i shot for. before i got to winnfield i started recognizing some things from my motorcycle trip. except then it was dark and i was cold and wanting to stop for the night. we had stopped in winnfield, and it was a pleasant memory driving by the best western this time. but this time i was moving on. i hopped to la 6 and it was off to the Texas border. i made it with about an hour or so of light left.
i’ve come into Texas this way three times now, and i love it. you drive over a long bridge that goes over the reservoir. here’s a pic i took while i was driving over it: 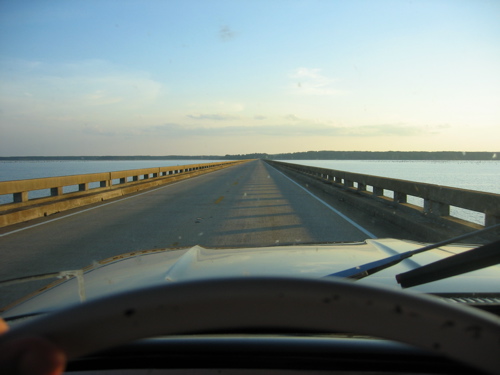 as i hit the bridge, a johnny cash song was playing. when i got to the Texas side, a band was doing a modern alt.country version of a cash song. when you get to the Texas side, there is a big generic “welcome to Texas” reflective sign, but if you go a couple hundred yards further there is an awesome old stone sign in the shape of Texas. the first time i came across it, the Texas was facing you as you drove toward it. the second time it still was, but the land around it was torn up. this time they’d completed the work. there is now a nice pavilion with all of the monuments and such, and the old rock Texas sign faces the road. here’s my truck enjoying its first taste of home:

i swear when i got out to take the pic i saw a smile on its grill.
originally i was thinking i’d stay at a hotel right there by the reservoir, since it’d be a nice locale to stop and rest and contemplate life, and i had the next day off from work anyway. but i wanted internet access and they didn’t have it, so i decided to go ahead and drive into lufkin. i took 21 to 103 into lufkin. a few miles into Texas they played wayne hancock’s “going back to Texas”…nice.
anyway, there’s a place called bryan’s smokehouse in lufkin on 59 that i’ve eaten at every time i’ve come into Texas this way, so i had to do it this time as well. it was already closed when i got into town, so i checked into a hotel, went and washed my truck, then headed to a place i’d seen on the way into town called ray’s drive-in. it’s an old drive-in with the covered patio parking and the neon everywhere. i figured my truck would feel at home there. food procurement accomplished, i retired for the evening.
total miles today: probably around 350